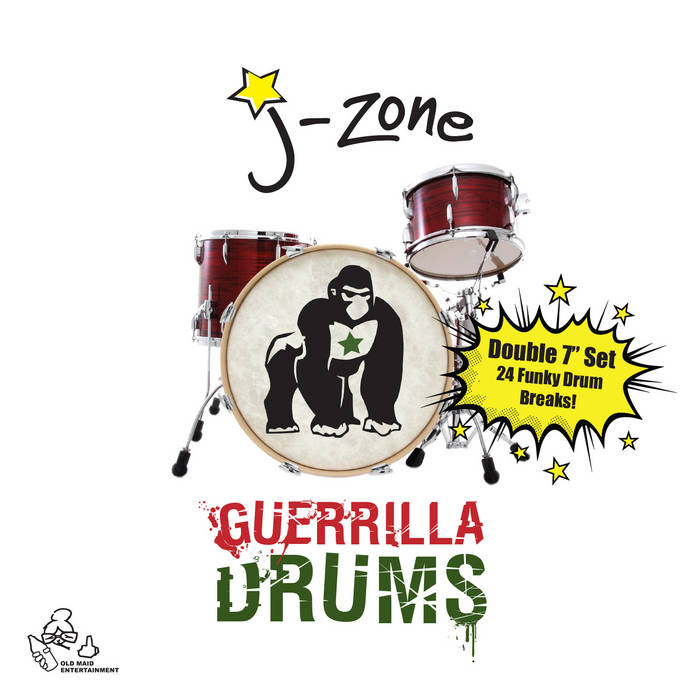 YallDontHearMe Picked this up and I’ve been throwing it in all the samplers and kits. Real life sickness that I can use across several beat styles, regardless of what I want to make. Man knows his drums and like any good drummer he knows how to leave room in here for you to do your thing.

NOTE: The sale of Guerrilla Drums on Bandcamp is for the VINYL ONLY. Free download limited to the three tracks I've listed for preview. To hear the entire break record before purchasing, click this link:

A bit about Guerrilla Drums:

After the positive response to (and heavy sampling of) 2014’s Lunch Breaks and 2015’s Backyard Breaks, drummer/producer J-Zone took a break from the breaks. Looking to improve and develop as an all-around drummer, the New York native spent the next two years woodshedding, performing live with bands in different genres in New York City and developing his own funk bands, The Du-Rites and The Zone Identity. Zone also had big shoes to fill when he found himself in the drum chair for legendary funk outfit (and drum break/DJ staple), Manzel. The late-blooming drummer’s journalism background also inspired the Red Bull Music Academy column, Give The Drummer Some, in which he interviews some of the most recorded and sampled drummers of all time. With a two year crash course in playing, studying, practicing and talking drums with some of the greatest break architects of all time, J-Zone returns with knowledge and polish he didn’t have for the first two installments. 24 breaks deep, Guerrilla Drums is the result.
Since his previous installment, J-Zone has laid down grooves for Danger Mouse, Alchemist, Prince Paul, Marco Polo, DJ Skizz, Bobbito Garcia’s upcoming Rock, Rubber, 45s documentary and more. Zone’s drumming has been noted on social media by Questlove, DJ Scratch, Steve Arrington and more. More versatile than Lunch Breaks and more jam-packed than Backyard Breaks, effort #3 is worth the wait.

Special thanks to Rick Shutter for letting me borrow a snare drum, Main Drag Music for getting me my old drum set back and Maxwell Drums.

My childhood dream of playing bass in a funk band died when Jheri curls went out of style. I had an on again-off again rap career. I wrote and self-published a book in 2011, learned to play drums shortly after and returned to my funk roots, where I feel most at home. My bands The Du-Rites and The Zone Identity reflect that. The music to the left is my story through it all. Dig. ... more

Bandcamp Daily  your guide to the world of Bandcamp