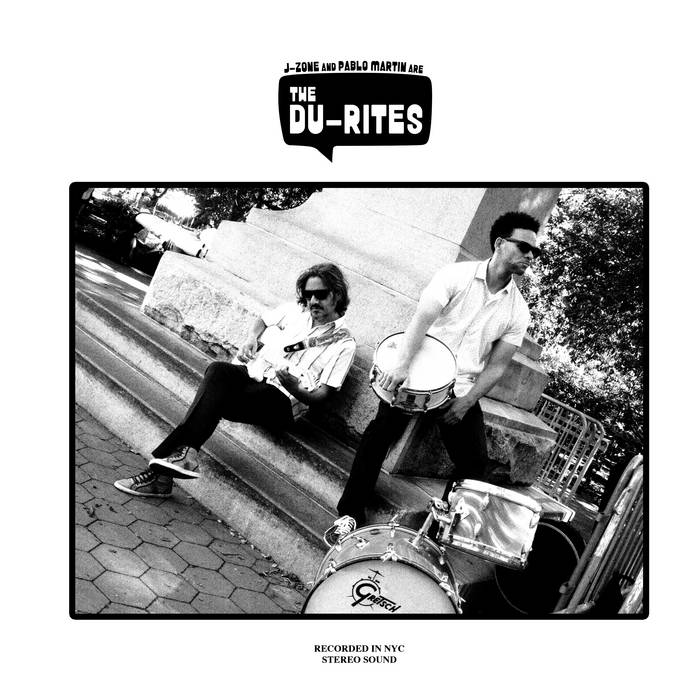 Matt Horowitz I didn't even know modern day Soul-Funk like this even existed! Thanks to DJ Prestige at Flea Market Funk for spreading the Funk-laden gospels and opening my ears to the sweet, sweet sounds of J-Zone & Pablo martin (of Tom Tom Club)! Favorite track: Bug Juice.

The Last Of The Only

NOTE: This is a funk instrumental album from my band with long time mastering engineer and Tom Tom Club guitarist, Pablo Martin. The Du-Rites is our name and funkin' is our game! The album was only posted here on my J-Zone Bandcamp because there are a number of subscribers (thank you all!) to this account who wouldn't otherwise know about it. The Du-Rites official Bandcamp is:

Our mini-documentary can be seen here: www.youtube.com/watch?v=_H0hPmO2mUQ

The digital download will be for sale on my J-Zone page for awhile, but for vinyl, cassette and any other physical merch, go to The Du-Rites Bandcamp and you shall find. And subscribe there! Read below for our bio and more about this album...

Ever order a kale salad and discover a neckbone in it? That’s funk.
Ever write a love letter on a chicken grease-stained napkin? That’s funk.

The Du-Rites are without a doubt the soundtrack to both of those situations, but by definition, The Du-Rites are a duo of New York-based multi-instrumentalists comprised of Pablo Martin (guitar, bass, synthesizer) and J-Zone (drums, organ, bass, turntables, small percussion instruments that require little skill).

Funk comes from so many places that it’s hard to visit them all, but the duo manages to do just that on their self-titled (and almost wholly instrumental) debut LP on Old Maid Entertainment/ Ilegalia Records (with vinyl LP c/o ReDefinition Records). From the greasy, lo-fi and syncopated grooves of the late ‘60s (“Bug Juice,” “Git’n Off,” “Ghetto Ferris Wheel”); to ‘70s cop show funk (“The Chief & I,” “Hustle”); to the slick stomp of the early ‘80s (“Du-N-It”), The Du-Rites have membership at both the rib shack and the discotheque.

Individually, both J-Zone and Pablo have already planted their funk seeds, albeit in different locations. With 24 years experience as a hip-hop producer, 20+ as a DJ and four as a working drummer recording for the likes of Danger Mouse, various film scores (the Stretch and Bobbito Documentary being one) and his own albums and break beat projects, J-Zone knows a thing or two about what makes a song groove. Pablo currently holds down guitar duties for the legendary new wave band, Tom Tom Club, and has worked as a mastering/sound engineer in New York City for 20 years. The Argentina native brings a musicality with his Telecaster guitar that pairs with J-Zone’s rhythms and screaming organ riffs for a hard-grooving and quirky funk sound.

With influences ranging from the obvious (Booker T. & The MGs, Lalo Schifrin, Cameo, Kool and the Gang, The Meters, Jimi Hendrix, P-Funk, Motown, Herbie Hancock, and James Brown) to the obscure (overlooked late ‘60s funk bands Warm Excursion, TSU Toronadoes, The Counts and Willie & The Mighty Magnificents), The Du-Rites bounce from improvisational, raggedy and psychedelic to tight and snappy with the skip of a track. Pablo’s proficiency in punk, disco, pop and Latin and J-Zone’s deep roots in hip-hop and soul combine to make one of the more off-kilter, but undeniably funky instrumental long players you’ll dig into.

The Du-Rites’ music is already being featured in a major film in 2017 and if you need a theme song for your fried chicken joint, they’ll get it done. But for now, enjoy their first full-length album.

My childhood dream of playing bass in a funk band died when Jheri curls went out of style. I had an on again-off again rap career. I wrote and self-published a book in 2011, learned to play drums shortly after and returned to my funk roots, where I feel most at home. My bands The Du-Rites and The Zone Identity reflect that. The music to the left is my story through it all. Dig. ... more

Bandcamp Daily  your guide to the world of Bandcamp